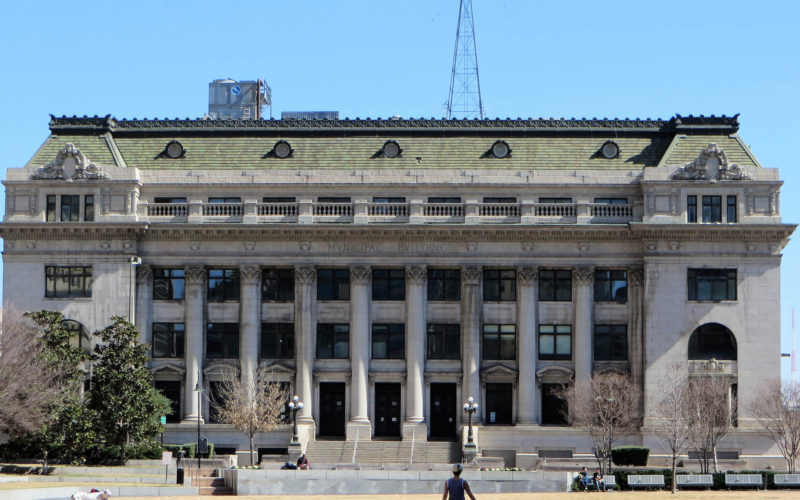 A few months ago, workers restoring Dallas' Old Municipal Building began ripping down ceilings that were added in the 1950s. KERA's Jerome Weeks reports they discovered evidence of something that wasn't supposed to be there: historic, hand-painted murals from 1934 that were reportedly destroyed.

There were ten murals on the second floor of the Old Municipal Building at Harwood and Commerce Street. That was Dallas' City Hall — which was built more than a century ago — and the murals depicted the city's history. But in 1954, those ten murals were supposedly destroyed. Dallas artist Philip Lamb recalls reading a Dallas Morning News report on their fate: "The headline was 'Murals Are Doomed.'"

How very Dallas — kill anything remotely un-chic, anything old. Why did the murals have to go? Well, Lamb says, the push actually came from a sentiment bigger than just Dallas’ embrace of whatever’s shiny and next. At the time, Americans in general wanted to put the past behind them.

"The war had just ended not too long ago," he says. "And there was such a movement to modernize. Downtowns were getting all their old facades covered with aluminum. And I think that when people saw those murals, they just reminded them of how awful things were from the early ’30s."

They have a selection of skilled and well-prepared individuals-from laborers to project managers-that are mindful and respectful of historic structures.
Gerald Moorhead, FAIA , Senior Architect
Bailey Architects
...the very successful and on budget completion of this first THCPP project was a harbinger of many more successful and memorable courthouse project relationships.
Stan Graves, Senior Principal
ARCHITEXAS
Their professionalism and ability to provide value to the owner through their knowledge and experience can not be overstated. All of our projects have been safely completed, on time, and within budget.
Ken Paar, RA, AIA, Vice President
Conley Design Group
Mr. Sellers' knowledge and experience in restoration work, attention to detail, project budget and value for the client, brought me to the decision to hire him as a professional consultant.
Larry Irsik, Principal
ARCHITEXAS
It quickly became obvious that you wanted to do the project right in every respect, and many improvements were made along the way as a result of your diligence and attention to detail.
H. Glenn Reed, Project Architect
The Williams Company
Your professional management and technical skills were well suited for such a complex restoration and the demanding client committee structure.
Kim Williams, Principal
The Williams Company
...our project was a month ahead of schedule plus was right on budget.
Ross Montgomery, County Judge
Shackelford County