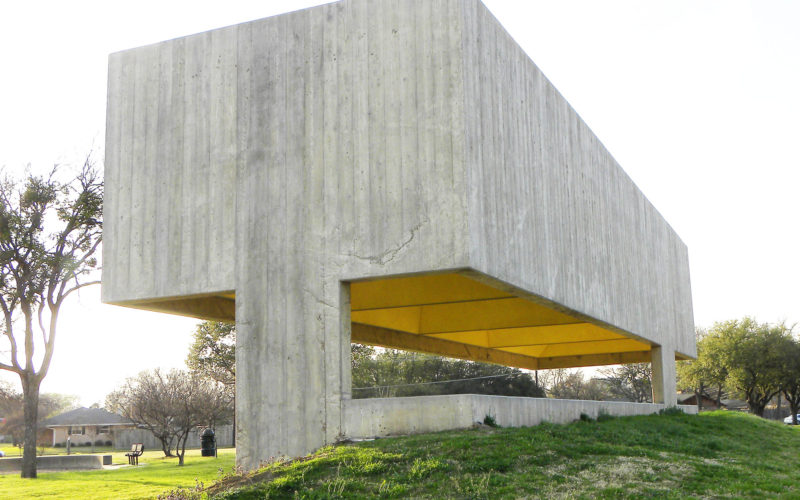 In many municipalities, public shade structures can be an afterthought: Prop a canopy on some posts, and shade you shall have. Not so in Dallas, Texas. Two bond referenda there, in 2003 and 2006, allocated money to replace some 30 of the city’s park pavilions, and Dallas Park & Recreation assistant director Willis C. Winters, FAIA, envisioned something rather ambitious: The city would treat each pavilion as a distinct commission, hiring architects—including firms such as Lake|Flato Architects, Elliott and Associates, and Snøhetta—to design the park structures. For Webb Chapel Park, in a residential area northwest of downtown, Winters tapped New York–based Cooper Joseph Studio, which had earned acclaim in Dallas with the Women’s Museum, designed by partner Wendy Evans Joseph, FAIA.

The commission came with loosely defined program requirements: shade, seating, durability, and ample sightlines through the space. The old pavilions being replaced were simple concrete T-beam shade canopies. Cooper Joseph turned to the same material for its Webb Chapel Park Pavilion. "Dallas is known for the quality of its concrete industry, so for us, it was the perfect material for a small structure with integrity and boldness," Evans Joseph says. But the architects modified their approach in formally and functionally inventive ways.

Your professional management and technical skills were well suited for such a complex restoration and the demanding client committee structure.
Kim Williams, Principal
The Williams Company
...the very successful and on budget completion of this first THCPP project was a harbinger of many more successful and memorable courthouse project relationships.
Stan Graves, Senior Principal
ARCHITEXAS
...our project was a month ahead of schedule plus was right on budget.
Ross Montgomery, County Judge
Shackelford County
Mr. Sellers' knowledge and experience in restoration work, attention to detail, project budget and value for the client, brought me to the decision to hire him as a professional consultant.
Larry Irsik, Principal
ARCHITEXAS
It quickly became obvious that you wanted to do the project right in every respect, and many improvements were made along the way as a result of your diligence and attention to detail.
H. Glenn Reed, Project Architect
The Williams Company
They have a selection of skilled and well-prepared individuals-from laborers to project managers-that are mindful and respectful of historic structures.
Gerald Moorhead, FAIA , Senior Architect
Bailey Architects
Their professionalism and ability to provide value to the owner through their knowledge and experience can not be overstated. All of our projects have been safely completed, on time, and within budget.
Ken Paar, RA, AIA, Vice President
Conley Design Group